Somewhere over the rainbow..... 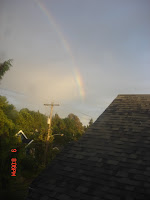 Yesterday was a pretty gray day. The clouds swamped the sky spreading a dark and damp overcast. I look out the window and I knew my day was not going to be happy. I was sick with a cold and a bit of a bad cough. With the forecast saying it was going to rain, there was no way I could make big brother's softball game :( That made the day even more grim, I missed his game. After sleeping in and giving my weary body the much needed rest, I dragged myself out of bed to work on my writing project. As the sun bore its way through the stubborn clouds, a glimpse of a better ending to my day was on the horizon. Sure enough, my brother and sisters come home from the games, telling how they lost the game in pompous and glory! We don't really play to win, but we play in the spirit of having fun and feeling like a community, a team. And that they did. The Sharks, my brother's team, played against a much better team, but they still managed to play a good game and have lots of fun. Though I would have loved to have been there, I was feeling better already. As rain pitter-pattered on the window sill, all was still except for my tapping on the keyboards. Suddenly, I don't really know why Iooked out the window, but in the sky was a pretty rainbow. It was the wonderful finale of what started out as a gray, unhappy day. Masha Allah!
Posted by SN Taylor at 5:08 PM